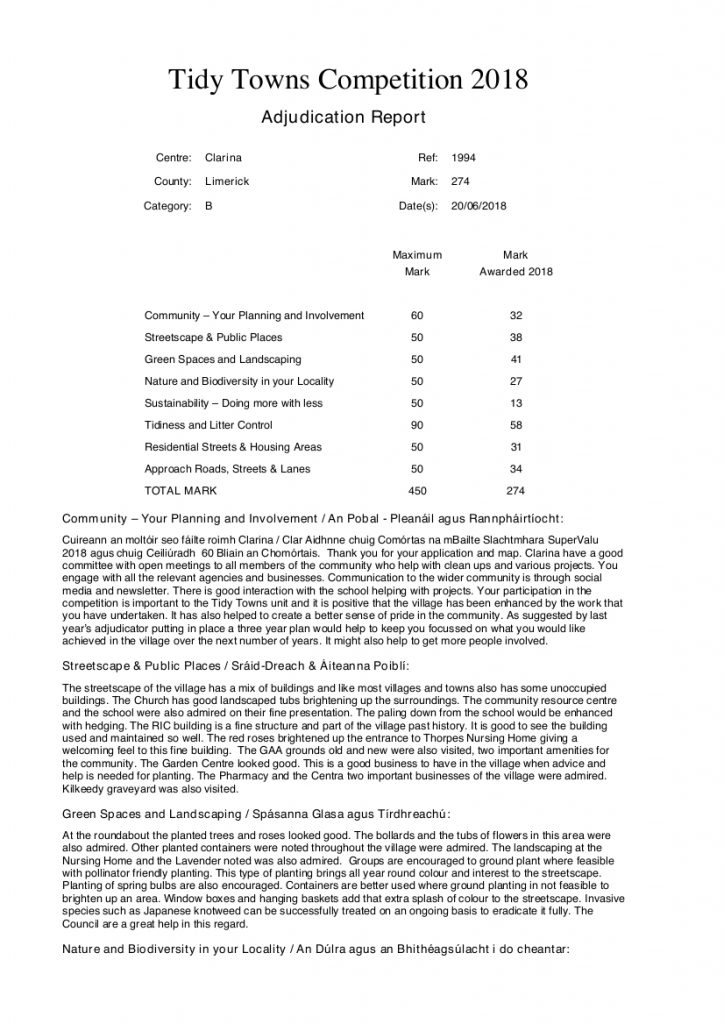 CLARINA TIDY TOWNS  have been very busy in the last few weeks. They have painted and planted all the tubs and other areas. It would be appreciated if people who have tubs outside their premises would water them regularly. A great clean up was done on the church road, with fantastic support from the residents.  Judging is now in progress, and with your help we will have our village looking very well.

Clarina Tidy Towns: We will be conducting a clean up around the village next Tuesday evening from 7.30 to 8pm meeting as always outside Croc’s Hairdressers. We are preparing for judging which begins in early June. Unfortunately due to our small numbers we are not as prepared as we should be. We really need some extra volunteers for the next few weeks. If you are free for those 90 minutes please come out and help us improve our village.

Flower planting will begin shortly as we are now coming into the summer months. More info coming soon….

In the five years that you have entered the competition you have grown and achieved much – well done. You appear to be a well-structured group with dedicated members who undertake weekly activities and attended eight separate training events with West Limerick resources. It was good to note you are working with the various bodies
such as the school and West Limerick Resources workers and photographs supplied showing joint work between these bodies were was great to see. The purchase of a ride-on mower with contributions from the local businesses was great to note. It is a good sign that you are supported across the business community. Note your adjudicator could not find an active FaceBook page for Clarina on-line although this was mentioned in your entry this year as a form of communication for your area. Your three-year plan could be more substantial and perhaps involve input from youth groups on one project or specific actions with reps from the various residential estates that is not related to litter picking.

It was your adjudicator’s first time in Clarina and there are wonderful pockets through your community and you have worked hard to achieve an area of which to be proud. Kilkeedy cemetery was admired – what a lovely heritage building you have here. The rules of the graveyard are very dominantly displayed which was a bit of a shame where a nice welcome and nicely toned sign could have been displayed here. Can this sign be more discreetly placed?
The newly opened Community Resource Centre looked excellent with the coat of arms presented nicely on the front gable. The school nearby also looked well.

The large open concrete carpark by the western roundabout, and the stark boundary wall needs some softening with possible planting of ivy or honeysuckle. But it was lovely to see nice planters at Fifth Ave and the hair & beauty shop here giving a much needed lift to this area.

Your adjudicator has concerns regarding the tin shed/ premises at the crossroads at the centre of the town that looks very precarious and could be a potential health & safety hazard.

There are some bedding plants in planters at the western roundabout but they are small and low-level. It is suggested that maybe some shrubs are placed here to provide structure and form throughout the year and hopefully to also reduce the effort of planting and maintenance on the longer term.

It is not until you stand above the landscaped bed at the Fisherman’s monument do you realise that it is in the shape of a boat. If slightly angled or raised this would look well to passing motorists.

You provide photographs of Corcamore corner highlighting that you are discussing possible planting ideas for 2014/2015. As this is quite rural it would be good to use native trees/shrubs here. A very useful document is the heritage Council’s publication on Conserving and Enhancing Wildlife in Towns and Village which is available to
download for free from their website www.heritagecouncil.ie

Your adjudicator was just delighted to see the field at the back road from the Fisherman’s monument full with yellow flag irises.
All trees at the site for the Fisherman’s monument should have their stays removed as they are strong enough and the stays are now rubbing on the bark. No doubt the bat box at Kilmeedy cemetery will add to their natural habitat here. Your adjudicator was also impressed to know that you will be using your own compost in your landscaping schemes.

It was good to read the details of the wildlife observed in your community. One suggestion would be to widen this to involve more within the community or to carry out a general habitat’s survey to determine how you can enhance the natural heritage of Clarina for the benefit of local biodiversity.

Good to note you have maintained and repaired birdboxes. Have you had any residents in previous years? Perhaps you can collate this information or join in with some of the national surveys organised by BirdWatch Ireland?

It was great to note you are re-using your bulbs and growing plants from seed. Have you considered involving a local green-fingered group in this particular aspect such as a local ICA group?

Clarina is quite dispersed so your adjudicator wonders if there could be some provision made on the GAA road and the school road for cycling?
There is potential to gain a lot of marks in this category of the competition so it is recommended you visit the TidyTowns website for ideas on how you can achieve points here or maybe you are hosting bring & buy sales or run book rental schemes already and you just need to tell us about such initiatives.

The large garage on the main street should be congratulated as it presented very well despite the high volume of traffic in and out of here.

No doubt as a result of the recent election, there were a lot of cable ties on the posts outside of the community centre and school. There were two large metal posts as you go into the grounds of the school that have no apparent use – perhaps they could be removed if this is correct?

The bin beside the damaged monument on the back road by Hayes shop was full. There is quite a large aperture here in the bin so perhaps some of the litter is being deposited here illegally? You could prevent this by reducing the size of the aperture with cable ties or a secured piece of plastic.

There was some litter in the New Village area. There is an old telegraph pole here that is no longer being used – can it be adapted to make a feature of this or could it be recycled?

Cill Chaoide presented well. In the new estates there is a large amount of grassed area in front of the fence that separates the unfinished estate with porta-cabins that have graffiti on them. Maybe a feature could be installed here or the grass allowed to grow long in places with paths mown into the grass for children to enjoy and follow, whilst
also benefitting wildlife too. Perhaps some honeysuckle or ivy could be planted to screen off this large area to the south better and provide a nicer view for the residents? It was good to see the nice wooden fence in the estate blocking off the unfinished houses here.

There is a nice sense of place in Clarina with the green colour continued through the village on planters, signs and field gates. Perhaps the signs at the Fisherman’s monument could be painted this same colour in the future when being re-done? The old pump was admired. The painted blocks and planters at the roundabout as you approach Clarina from the West were noted. But this roundabout is oddly incomplete and grassed just ¾ across. (Also on adjudication day it was damaged by a driver
who obviously didn’t realise there was a roundabout here!). Good to see use of planting at the base of the fencing here to screen off the road-side fencing at the unfinished estate.

Well done to the matching planters outside the boundary walls of homes along Foynes Road.

Hayes shop is a lovely little part of Clarina and presented very nicely and there was some nice planting in the area. What a pity the monument here has been damaged here. The road in front of the shop needs some potholes repaired. Likewise where you pull off this back road to access premises such as the school and community centre there are a lot of potholes and wear and tear on the road that needs to be addressed.

The exterior wall of the GAA pitch is very harsh and it would be great to try and enhance this with planting of ivy or honey suckle or other climbers.